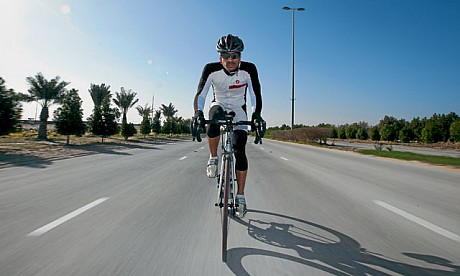 Always sporty in his younger years, Sheikh Saqer put exercise on the back burner when he was studying for a PHD overseas but as he came up to his exams he began to feel ill and tired and a trip back to Bahrain for tests revealed he was suffering from type 2 diabetes.

That was five years ago and along with the diagnosis came advice to start exercising, as this is known to be key in regulating the disease. So Sheikh Saqer went back to weight lifting, the sport he had followed prior to his studies.

He said: ‘I noticed straight away that I was starting to feel better.

‘Pretty soon afterwards a friend mentioned that there was a triathlon coming up at the Marina Club and, with a couple of weeks notice, we decided to give it a go – I’m the sort of guy who will never say no to a challenge.

‘We had to go and get bikes, we got them just the week before! I had no background in swimming so that was also a challenge but I knew the running would be OK as I used to run about three kilometres regularly.’

The pair were doing a a sprint length race – 750m swim, 5km run and 20km bike ride – and Sheikh Saqer came in fourth or fifth from last ‘all the people were gone by the time I finished, but by then I’d caught the bug!’

He also did a lot more research about diabetes and found that, though it can be medically controlled, the pancreas does eventually get worse and sport and exercise can really help.

After a great deal more training he decided to tackle a Half Ironman in Singapore in 2010 and soon joined up with Bahrain Road Runners (BRR) where he became a member of the organising board.

Sheikh Saqer took part in last year’s Abu Dhabi Triathlon and was delighted to be invited back this year as part of the event’s Local Heroes Programme which brings back former racers and challenges them to bring on and mentor a newcomer to the sport. As his protégé he chose BRR member May Al Haji.

He said: ‘I’m very much in favour of women’s development and I wanted to choose somebody who was a mum and a working woman, May is both. She’s a runner and tennis player but had never thought of taking up triathlon, so I wanted her story to be able to inspire other ladies to see what they can do.

‘Don’t invest in shopping or jewellery – two of the most common things for people to spend time and money on in Bahrain – invest in your health instead.’

Together the pair are training for several hours per week with May particularly concentrating on her cycling and swimming and Sheikh Saqer is also offering plenty of nutritional advice such as making sure she replaces not only the water she will lose through sweating during the race but also takes on board salt, which is lost at the same time.

Of his own dietary regime he says: ‘These days I see food as fuel. Obviously because of the diabetes I have to take a certain amount of care but the amount of exercise I do does allow me to cheat a little as long as I am working out.’

His commitment to the sport of triathlon brought an unexpected but very welcome development in December when he was announced as president of Bahrain Triathlon Association by Sheikh Nasser bin Hamad Al Khalifa, chairman of the Bahrain Olympic Committee.

She Saqer explains: ‘Around this time last year, something amazing happened. We were organising a triathlon with the Bahrain Road Runners and the office of the Royal Court got in touch to say Sheikh Nasser wanted to take part.

‘I was amazed. For a young guy he was incredibly well informed about endurance racing, nutrition and fitness, and, watching him, it’s clear he is a natural athlete.

‘Obviously I had heard of him before but I didn’t know him. But, after that, we became friends and we travelled together to compete in Iron Man competitions in Berlin, Germany, and Florida, USA. Sheikh Nasser became convinced that we should be hosting international triathlon events here in Bahrain hence the formation of the Bahrain Triathlon Association, which I am honoured to be involved with.’

It’s aimed to create an Olympic triathlon team and Sheikh Saqer says plans are underway to put training facilities in place such a cycle only road in the near future.

Abu Dhabi Triathlon takes place on March 15 and Bahrain Road Runners has a full programme of events running throughout the year with triathlons at varying distances in April and May check outwww.bahrainroadrunners.com for more information.